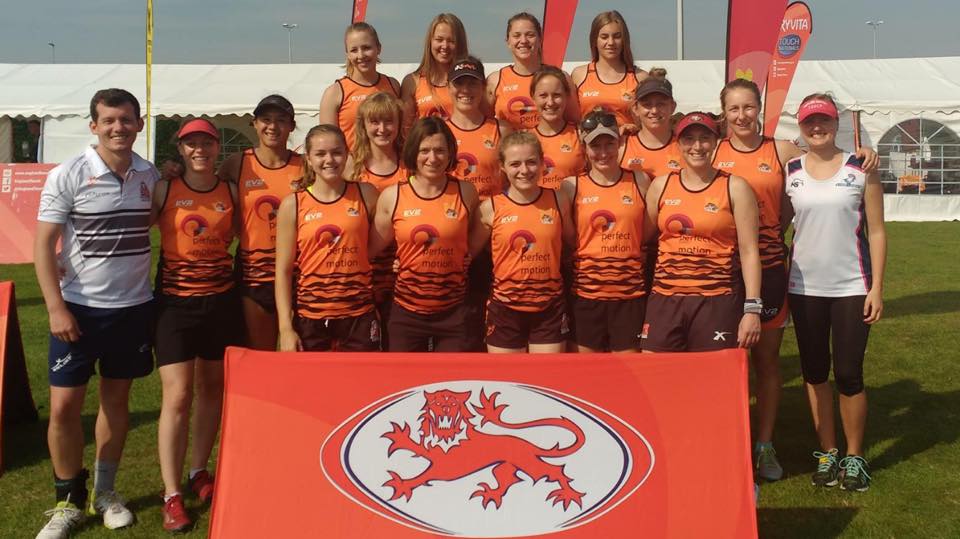 Midlands Women take the National title, taking the trophy away from the South East for the first time since the tournament’s inception 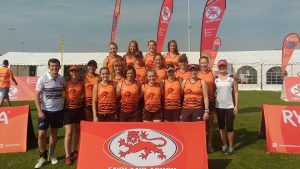 Write up by Kat Jones:
Although the Midlands sides didn’t have a long preparation time ahead of the tournament, many of the girls chosen for the WO side had played together either at the Premiership Permit or Senior Euro’s competitions in Edinburgh earlier in the summer giving them a great grounding as a team. The Midlands WO got off to a shaky start with a 5-2 loss to the SE sharks, but they built on each successive performance, beating the NW blades and SW Saxons 7-1 and 8-1 respectively later in the day. The following day the girls faced the Wales national side, and despite a late resurgence by Wales, the Midlands won by 7-3. Moments of brilliance by Jade Grantham (Notts) with a show-and-go and quickies between Jen Lee (galaxy), Anna Goddard (Cambs) and Sadi Meakin (Notts) created some lovely scores but the defensive performance really kept Wales out of the game.

The next game of the 4-game Sunday was to the SE Taipans which the Midlands WO were disappointed to lose 5-4. Anna Goddard scored a brilliant 21 short with Stan (Vicky) Franks (Cambs) which was disallowed, and the Midlands had a number of other great scoring opportunities that they unfortunately couldn’t quite convert, giving the Midlands the determination to win their remaining 2 games against the West Wildcats and the SE Samurais. This they did comfortably (12-1 and 6-0 respectively). At the end of a long second day, the Midlands were 3rd and ready for a semifinal match against the SE Taipans.

Monday was finals day and first up were the Taipans. A win would put the Midlands in the final, a loss would see us play a bronze medal match. The Taipans came at us hard and we went down 2-0 making Coaches Ben Powell (Cambs) and Tania Dobman (Austria) pace nervously in the subbox. However, we perfected our shift and midfield defence and put a lot of pressure on their drive, allowing us to score 2 back before half-time. They came out hard again in the second half but our defence and drive were too intense and we scored a further 5 unanswered scores before full time, putting the Midlands in their second ever final. Brilliant performances by our wingers Stan (Vicky) Franks (Cambs) and Lucy Norburn (Cambs), and some excellent play midfield by the special pod and the Kate Davis-Bavin (Notts) scoop in attack, as well as a completely solid defensive effort showed the team really what they were all capable of when they worked hard for each other.

This mentality helped the team take confidence into the final against the SE Sharks. Kat Jones (Cambs) won the toss and the tap off team quickly scored. The midfield defence for the first 10 mins of the game was the best the Midlands had played all tournament, allowing them to go 3-0 up. However the SE Sharks were relentless and never gave up, coming back at the Midlands continuously. The game was high scoring and the SE Sharks had a period of dominance in the second half that brought them to 1 away from the Midlands, but through sheer grit and determination, the Midlands finally held on to their initial lead and took the game 8-6.

Congratulations to all of the team, each one of whom played their part in achieving the title. Well done to Lucy Norburn (Cambs), Megan Green (Cambs), Anna Wilson (Cambs), Kate Davis-Bavin (Notts) and Jen Lee (Galaxy) who all played their first tournament for the Midlands. Well done also to Kat Jones (Cambs) and Sadi Meakin (Notts) (captain and vice captain respectively) for leading the team, and thanks to Ben Powell (Cambs) and Tania Dobman (Austria) for their great coaching vision and support from the sidelines. Congratulations to Stan (Vicky) Franks (Cambs) for getting the players MVP and Jen Lee (Galaxy) for getting the coaches MVP.

Lastly, thanks for all the support from the friends, parents and other Midlands players who cheered the girls on to victory, without whom we might not have triumphed! 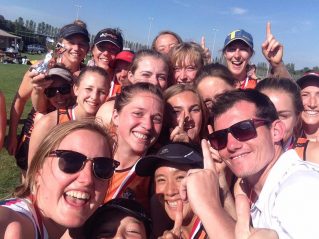 For further photos of the mens finals http://colinhulett.zenfolio.com/p670681261