In the first of our superleague season, the Honey Badgers were victorious against Superheros. It was a well fought battle between Cambridges top players.

Badgers managed to build up a good lead into half time. Superheros started to come back in the second half but it just wasnt enough.

The superleague was created to enable our senior players extra game time to play at a higher level in preparation for tournaments. If you wish to get involved then make sure you come to future training sessions and declare your interest to our coaches. The superleague will return again next spring league. 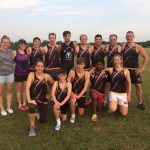